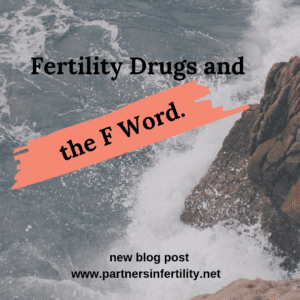 Let’s uncover a truth about fertility treatment: fertility drugs make a lot of people feel crazy, anxious, angry, and out of control. They can cause people to cry for hours over nothing.  It’s not just because you tend to be anxious or a planner.  It’s a thing, even if your doctor says it’s not. Fertility drugs and the “F” word belong in the same sentence.  Can I get an amen? Let your “F” word fly!

As one of my clients said during one of our sessions, “Don’t mind me. I need to put on a fresh estrogen patch. What fresh hell is this?”  She described asmorgasbord of feelings on this and her other fertility medications. “So. Many. F*cking. Feelings.” she said, as she put the patch on her belly. She was serving up “F” word realness.  While her descriptions were making us both hysterical—this adorable human being can curse like the crew on a Navy ship—we were having a serious discussion.  The drugs negatively affected her work, her ability to think, her ability to sleep, and her ability to have a civil conversation with her husband and her clinic. She did not recognize herself at times. “I feel sad, crappy, and bloated, with nothing to show for it,” she added.

I was able to assure her that I had known her before and after she started fertility drugs and the “F” word was not nearly as prevalent before she started her meds. I also assured her, because she was really worried about this, that she was not losing her mind and she would re-find her real self when she was finished with the drugs, when she was pregnant, when she delivered, and when she was living her real life again.After the battles and wars of fertility treatment were behind her.

So take heart, my friends. Fertility drugs really can make youfeelcrazy but you are not crazy. And from the East Coaster in me to you, it can feel super good to use the “F” word, early and often, loud and proud.  Get all that frustration, sadness, and fear out. Just warn the people around you first that you’re gonna blow.  They might learn something. 😊

We know it is hard. We are here to help. 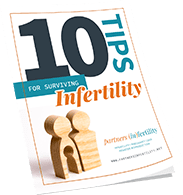 Enter your name and email address here and we will send you our gift, Ten Tips for Surviving Infertility. 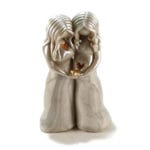 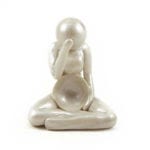 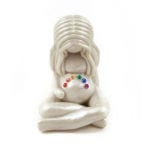 We Are Here To Help.